You can check the estimated ink levels from the printer software or from the printer control panel. When no memory card is inserted, the printer screen displays six ink drop icons showing the approximate ink level for each cartridge. You can also press Select Photos ⏵ to see a larger, more accurate view of the ink levels.

Make sure you purchase the right ink cartridges for your specific printer. Cartridges are not compatible between different brands, and often not within the same brand. HP often designs its inkjet hardware to use country-specific consumables. When you unbox a new HP inkjet printer and set it up, you install a set of ink tanks that ship with the printer. As you turn on the device and get ready to use it, an initialization sequence localizes it to the country associated with the ink cartridges you installed.

Hewlett-Packard Company cannot recommend the use of non-HP ink cartridges. Any damage caused by a non-HP print cartridge is not covered under the HP warranty and service agreements. XL (Extra Large) cartridges cost more but do provide better value in the long run. They will be able to print almost double the pages of a regular cartridge. Our advice is that if you print often, go with XL. However, ink can dry up. So if you are not a frequent printer, go with the regular cartridges.

Which ink cartridges do I need for my HP Photosmart 8250 Printer?

The HP Photosmart 8250 broke with HP’s tradition by offering a single ink system, with replaceable ink tanks for each of the six colours. The cartridges for the Photosmart 8250 don’t have built-in nozzles because the printer has a permanent print head. You must install all six cartridges. The printer will not work if an ink cartridge is
missing.

1. Press the power button to turn on the printer, if it is not already on. 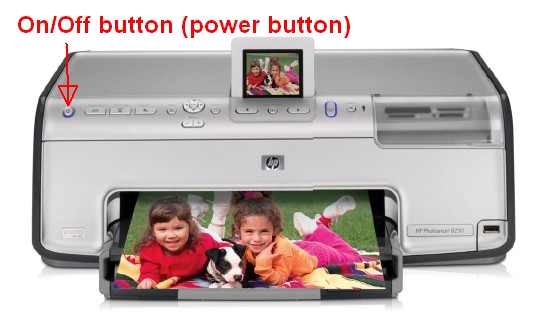 Remove the old cartridge
2. Open the printer top cover. Wait until the print cartridge is idle and silent before you continue. 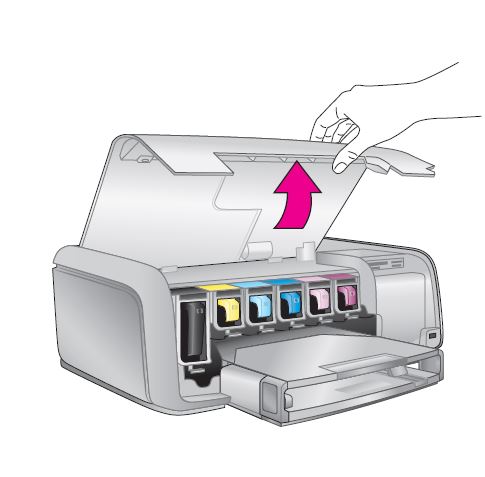 3. Squeeze the gray tab below an ink cartridge slot to release the gray latch inside the printer, then lift the latch. The ink cartridge areas are color-coded for easy reference. Lift the latch bel owthe appropriate color to insert or replace a cartridge. From left to right, the ink cartridges are black, yellow, light cyan, cyan, light magenta, and magenta. 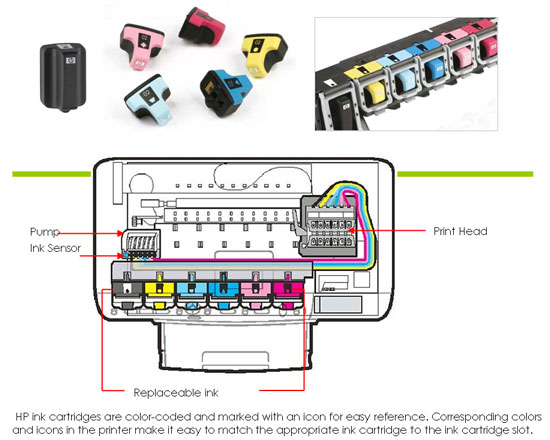 4. Now remove the old cartridge by pulling it toward you out of its slot.

6. If there’s any small plastic tape (not the label) on the cartridges, remove it using the pull tab.

8. Press down on the gray latch until it clicks into place.

9. Repeat step 5 to 8 to replace the other cartridge, if necessary. 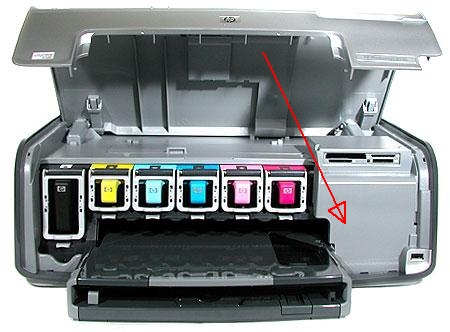 11. Place the old ink cartridge in the box and refer to HP’s recycling instructions at http://www8.hp.com/us/en/hp-information/environment/product-recycling.html. You can also check out Amazon’s list of recycling programs and websites

that will help point you in the right direction to recycle most anything.

Aligning the printer
Use the following procedure when the self test report shows streaking or white lines through any of the blocks of color.